ONE FLEW OVER THE CUCKOO'S NEST By Ken Kesey 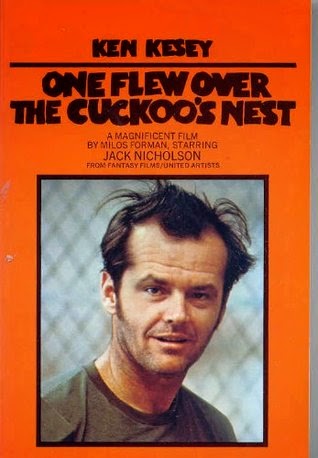 I've been wanting to read Cuckoo's Nest ever since I saw the stage production at our local theatre. I must say that if I was blown away by the incredibleness of the stage adaptation then I simple cannot put into words how much I have been effected but the novel itself. As someone who is greatly affected by mental health myself, I was interested to see what society had allowed to be broadcast.

I was a little worried when I started out reading the book and it doesn't have chapters as such, only breaks in the text and it's split into four lengthy segments, however in my excitement to read the book I push forward and I am so glad that I did! I badly notice the fact that there were no chapters and i found that once I picked it up, I could hardly bring myself to put it back down again. The pages seemed to turn themselves.

One of the biggest themes I picked up on throughout the novel was social standing and hierarchy. Although it s not a society in the way that we would normally talk about it, there is still a sense of community on the hospital ward and you can see the ranks which have been put in place. The vegetables and the bottom, followed by the chronics, then the acutes, after that its the aides and the the doctor and finally the Big Nurse. This is define clearly throughout and as in Tess of the d'Urbervilles and a lot of Percy Shelley's work (I choose these two as they are the other two texts i am working with for my course), The top tier of the society holds complete control and no matter how hard the lower levels of society try to change things, it never happens.

Although he isn't mentioned too often throughout the book, I think that Pete is my favourite character.  His quietness and the way he is put aside by everyone else really reached out to me. He clearly has a need that needs to be addressed and yet he is just swept under the carpet in a hope that eventually the issue will go away. I like Chief Bromden as well, and I think the way that his narration shows his growth as a person is very clever. His thoughts and opinions become longer and braver as the novel progresses whereas he started very quiet and scared and only narrating the bare minimum.

I am really glad to have read this book and I have really enjoyed reading it. But that isn't to say that there weren't parts of the book that made me stop and think twice about the way I think and the way society thinks as a whole. I think this is a brilliant commentary on Mental health and society, as well a social politics.

This is definitely one for a slightly older / young adult audience but one that I would most definitely recommend to every one. Its such a great book, with a brilliant message and to top it all, it's so easy to read!
Posted by Unknown at 4:13 pm No comments: