THE SCREAMING STAIRCASE By Jonathan Stroud 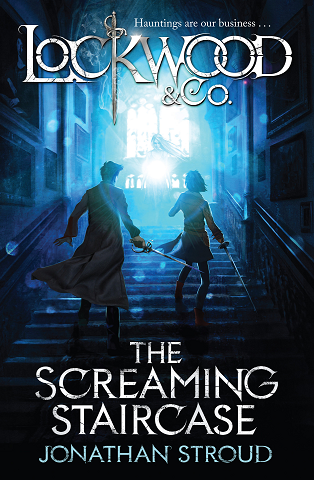 Wowser! I can't remember the last time I got so engrossed in a book! Five days it has taken me to read this and had it not been for college, it probably would have taken a lot less. Stroud is a genius and has left me clinging onto the edge of my seat for September to come around when the sequel comes out.

I am no stranger to ghost stories and tales of things that go bump in the night. In fact one of my many favourite series, is The Spook's Apprentice by Joseph Delaney, set in Lancashire (My home county, in fact it was set in the town next door!). I was familiar with the iron and salt and other remedies for ghosts and such like, but The Screaming Staircase seemed different. Whether that was because it was a different setting, or because of the differences in the ghost themselves, I'm not sure but I tell you now, September cannot come quick enough!

From the moment I 'laid eyes on him', I was in love with Lockwood. I'm pretty sure that this is what Stroud would have wanted and certainly, you can do nothing but love Lockwood. His humour, his smile, even his rebellion, everything about him is perfect, yet still you can see the underlying dark secrets that we never get to know about. I think this is what makes him so appealing. Despite this, there was no love interest between the main characters which to be honest, I liked. It was nice to read something that wasn't about the protagonists and they're relationships, you can probably tell, I'm not one for the romantic side of things. The small element of romance (if you can call it that) was confused and ambiguous which made you appreciate it more in the end when it was finally confirmed and revealed fully.

There is such a uniqueness to the Stroud's supernatural characters, he has taken something so well known and so stereotyped and turned it into something new and something brilliant. My favourite being a group of ghosts that work together as one and manifest differently in three different places. They are working as one yet they are separated.

I could write about this forever but I really don't want to give any of this away! I would recommend this book to everyone (Unless you're a little faint hearted, but even then you should be fine ;) ). It is a work of pure genius and as soon as I get the chance, the second in the Lockwood & Co. books will be in my hands and the pages will be turning! Read it! Read it! Read it!

Oh, and you might want to leave the light on...